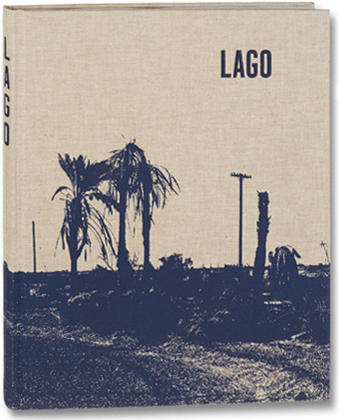 Last year while Gerry Johansson and I were wandering round the hall of the Grande Palais at Paris Photo looking for the real “gems” amongst vast quantity of the images on display, we bumped into several other photographers, who we stopped and chatted with. One of them who Gerry knew, but who I had never met before was Ron Jude. We chatted. I became curious about his new book LAGO but we never got to talk about it.

The first time I opened LAGO, the images in the book spoke to me in a familiar way; the perception of place is what concerns and fascinates me. I read the few lines of text that are in the book, (there are no picture captions), they are a quote from John Darnielle which although very appropriate and to the point left me curious.

“…I know it happened, and I have enough information about it to reconstruct the whole scene to my own satisfaction, but the person to whom it happened is somewhere so far off that I only know it’s me because I can see his face, and because I’m the one remembering. —John Darnielle, WOLF IN WHITE VAN”

I went looking on Ron Jude´s website (rondjude.com) for more information and found something there that was for me a confirmation:

“In Lago, Ron Jude returns to the California desert of his early childhood as if a detective in search of clues to his own identity. Through photographs made between 2011 and 2014, he attempts to reconcile the vagaries of memory (and the uncertainty of looking) with our need to make narrative sense of things…”.

To what does the title LAGO refer? At first I thought it was the name of a place, but then again lago means lake in Italian. Does it even matter? No not really. The place depicted although an environment unvisited and vastly different to my own Scandinavian milieu, is not unfamiliar. Places like it have been the backdrop in numerous US TV detective series, yet the familiarity is not in this context, it’s subtler. I recognize in the images the feeling of “going back home” and the decay of a place: the broken telegraph wires, the fences, the rubbish, what is left lying around, the (stray?) dogs. It’s not the arid yellow landscape, but humanity´s way of transforming and leaving its rubbishy remnants of civilization on the land that is sorrowfully all too familiar. Sadness and disappointment that’s what I’ve felt.

Perhaps in this book the strangest “remains” are the black LP record stuck vertically on edge in the soil, echoed by the image of the car tyre also standing vertical in front of an orange tree heavy with fruit. And the two images that show shoes in pairs lying on the ground, as though there is a body out of frame somewhere. There are spiders too, as well as the dogs – nature is all around us. There are also a few images that include humans in the book. But they are present in the other images, by association of what humanity builds, uses and discards. One is of a child hanging on a fence/gate outside a house with a pickup truck. Another is of a young person floating fully clothed in a mist-enshrined lake. (lago).

LAGO is a fascinating book and one I’m really happy to have in my bookshelf.