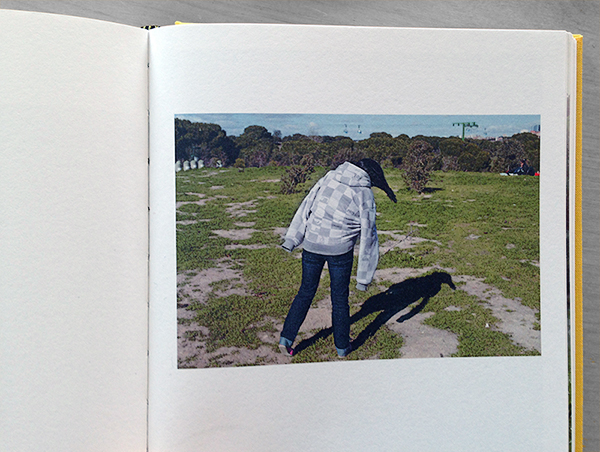 The cover of CASA DE CAMPO is bright yellow. It reflects the scorched dry earth of the park from which this book gets its title. On the book’s front cover is an illustration of 10 butterflies, but perhaps more interestingly on the back cover, in a pure black extraction, from one of the books photographs. In this a girl (perhaps) is centrally placed in the frame, walking across a worn grassy field, her jacket wrapped around her, sleeves dangling, she is leaning somewhat to the right. Her long hair points down towards the ground in an angle and in so doing her head takes on the form of a bird.

Casa de Campo is an enormous park in Madrid – over 1700 hectares and like other large urban parks, it serves very different purposes depending on who is spending their time there. Tourists entering the park from one of its darker shady corners declare on Trip Advisor their horror at the acts of male and female prostitution going on in full view. Others complain about the expensive tasteless food. Yet others recommend the zoo. There are many experiences to be had here. Photographer Antonio M. Xoubanova has given us his. In the press information distributed with this book we are informed that this is a “photographic fable” and the book is “designed as an ancient fairy tale.”

The colour images vary in content: from people to pathways, to fauna and flora, but always with the backdrop landscape of the park. Antonio M. Xoubanova’s story is told via the symbolism in the sequencing of the images where their individual strength grows as they are placed together in the linear order of the book. The photographer’s wandering becomes a journey. In the telling of the tale, we experience time and emotion.

I am left with a dark vision of Casa de Campo from this encounter. The park appears wild often dirty, with litter and rubbish. Two frogs tightly gripped in fists, a three-legged dog, another dog cowering, parrots in a circle and a white rabbit – truly the stuff of fairy tales. As for the park’s inhabitants depicted in this book, they use the place as their very own living room: sleeping, eating, playing, making love or just wandering about. Sometimes there is eye contact with the photographer and they pose, other times we see their backs.

At the back of the book there is a text by Luis Lopez that takes on a humorous satirical, anthropological tone, although it is serious in its message in what it tells us about the park and the people that dwell there.

I enjoyed CASA DE CAMPO. In today’s world of extravagantly sized and overly heavy photographic books, this book’s convenient size and weight is pleasurable in itself– it feels good to take up and hold. Casa de Campo is haunting literature, with a vision that you want to come back to discovering new relations between the images and their meaning.

John S. Webb is an English photographer who has been been living in Sweden since 1974. He has published over 10 photographic books. The latest of which is PLANTED, published by Nya Vyer, Stockholm 2012.