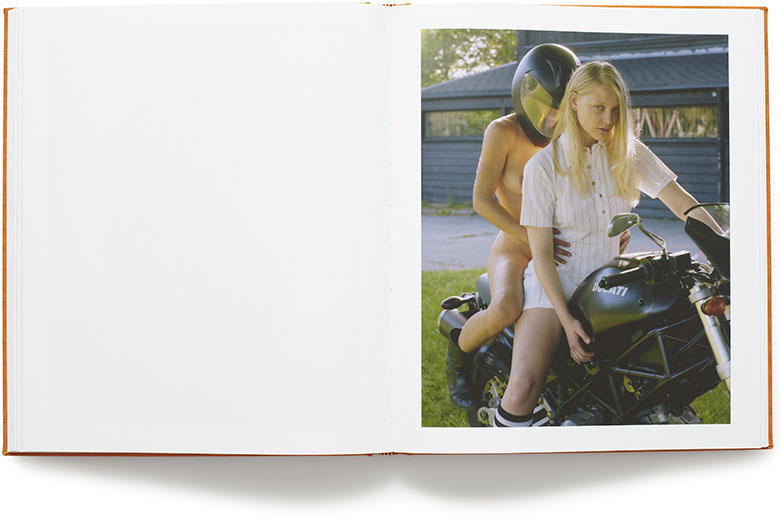 Rødland’s photographs of children offer the same ambiguity, but within the context of the other images, they are disquieting. Not unlike the controversial child portrait of Rosie by Robert Mapplethorpe, context plays a role in our interpretation. A simple photograph of a child playing in a pet’s cage may or may not take on other meanings, and it is this gray area that interests Rødland. With the turn of each page, we are compelled to assign a narrative, and in doing so, we map our own opinions and values. For some of us this can be an unsettling experience, a feeling that Rødland is steering us into corners, forcing us to confront societal taboos.

This is made evident by the inclusion of images referring to the 1980 US presidential election. Jimmy Carter suffered a devastating loss to Ronald Reagan. Reagan won the election by mobilizing religious conservatives with the help of Rev. Jerry Falwell’s Moral Majority. Falwell condemned homosexuality and was known for his defamation lawsuit against Larry Flint, founder of Hustler porn magazine. The religious right has continued to back proposed legislation founded on their moral convictions. This legacy has polarized the US and has been the subject of much controversy, including the passage of Proposition 8 in November 2008. The proposition overturned same-sex couples’ right to marry in the state of California where Rødland is based. The constitutionality of Proposition 8 is pending a ruling by the Supreme Court.

In Vanilla Partner Rødland insinuates the question, where do we draw the line between legislation and personal liberty? He accomplishes this via the distortion of conventional imagery. Each photograph builds upon the tension of the one that preceded it, like a steady drum roll, evoking within us visceral responses. Page after page, we expect to find a logical conclusion, but this is not to be. There is no elucidation. Rødland is more interested in how images play against one another, and how we assign them meaning. The matter-of fact quality of his work is a strategy. Rødland is aware that it is the very ambiguity of his series that engages us and grants us pause for reflection. Vanilla Partner is a challenging collection of photographs. Nonetheless, we are likely to encounter more than a few dog-eared copies among photography aficionados.